A close encounter with a Red necked Grebe 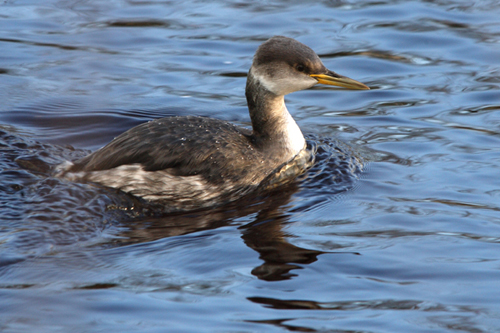 The cold weather continues! The drake Goosander present since November on the river in Ballycastle was joined by a second drake by the start of January.

Whilst trying to get a decent shot of these beautiful ducks I observed a bird swim upstream off the sea. As it got closer I quickly identified it as a Red necked Grebe, not a species normally seen close to shore, never mind on a river.

As I watched, it got closer and closer, happily diving and feeding only a few metres from me. In fact it came closer after catching small fish possibly to put off the harassment from Black headed Gulls.

Unfortunately from a photography point of view the light was atrocious all morning and despite the unwelcome attention of several dogs the grebe remained until the earily afternoon. Finally the clouds broke and a few decent shots could be had.

The bird tried to go back downstream several times, being put off going back to sea by walkers and dogs at the mouth off the river. Despite being looked for during the following days the bird has not returned.