Finally caught up with the Goosander 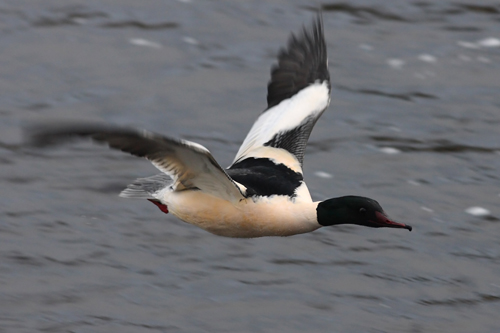 Goosander in flight
Goosander, Ballycastle
A few weeks ago I visited the lower reaches of the river in Ballycastle hoping to get close to a wary Goosander. At that stage the regular wintering bird had been joined by a second drake. A close encounter with a Red necked Grebe however distracted me and again I came home with no acceptable shots of the Goosander.

I had a free hour this afternoon, so dispite poor light, I got the camera gear out to give it a go. The bird was much more approachable than in recent weeks allowing me to stalk it down to 6 metres, though it remained very alert.

Normally disturbance by others works against you, but just occasionally it can be to your advantage. The bird was fishing close to the mouth of the river and I noticed a gentleman and dog approaching along the beach. I quickly positioned myself on a footbridge, hoping that if the bird took flight it would come past or under me. My plan worked, though obviously I would prefer it if owners would keep control of their dogs rather than encouraging them to chase wildlife!

Hopefully next time the sun will be out.