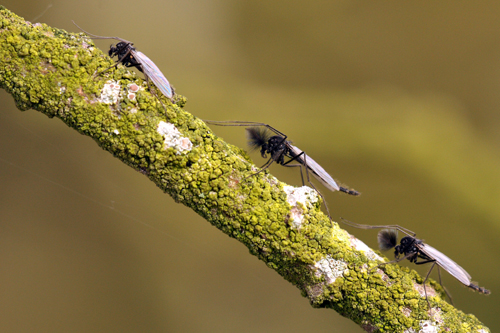 Chironomus anthracinus
First hatch of the year
This morning I was on the shores of Lough Neagh before work. I was surpised given the recent weather to find that a recent hatch of the Lough Neagh Fly Chironomus anthracinus had occured. Thousands of these non biting midges were sitting on every branch and stalk, it's hard to believe this only a fraction of numbers that are likely to hatch in coming months. These insects can form swarms as dense as smoke and the hum of wings seems never ceasing on warm, calm summer afternoons. I will try to get some shots of one of these spectacular events later in the year.

On the attached photograph two males with the feathery antennae, used to detect females (on left).

These insects are an important part of the lough's ecosystem. In their larval form in the waters of the lough they are important food for fish and wintering ducks. When they hatch they become prey for the summering birds around the shores.

On than note several Willow Warblers, Blackcap and Chiff Chaff were heard in song at Rea's Wood near Antrim.