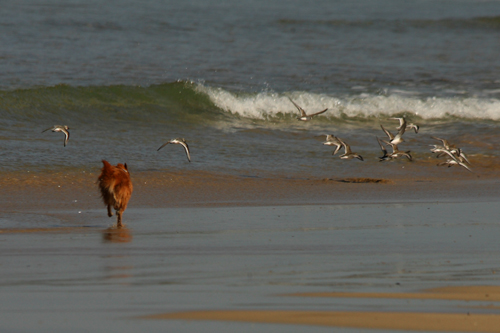 Dog Repeatedly Disturbing Waders
Winter Visitors Arrive
Having failed to locate the Ospreys I went north to the coast to look for seabirds and waders. I wasn't to be disappointed. A Gannet was feeding quite close inshore allowing me a chance to photograph it as it dived (see latest images).

As I stood on the shore a Turnstone flew in off the sea and landed nearby, appearing exhausted - had it just arrived in Ireland from the north? Meantime a small flock of Sanderling busily fed along the tideline, before being joined by a young Ringed Plover and several Dunlin.

I lay on the beach waiting for the bird to pass me so I could photograph them. It also gave me a chance watch how inconsiderate some people can be - deliberately walking at the birds, which may have only just arrived after many hundreds of miles of migration. Worse were those who allowed and in some cases encouraged their dogs to chase the birds up and down the beach.

When the beach was quiet the birds would often approach me to within a few metres, hoping that I would disturb craneflies in their direction. Images of the waders can be seen in the Latest Images gallery

Offshore a small group of Porpoises made their way up and down the coast fishing.