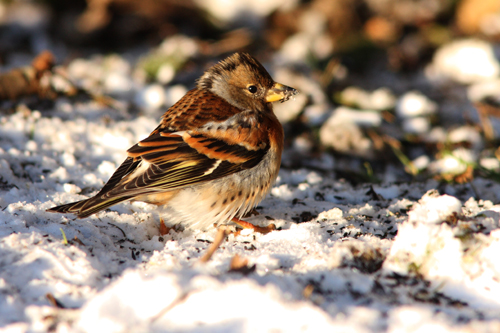 Brambling, North Antrim
Slippery Roads and Cracking Birds
Today I had to risk the local roads, not least to do some shopping, but also to visit some of my feeding stations to fill up feeders and it likely to be the end of the week before I get back to them and birds will need all they can get.

Once again I was graced by the all to brief appearance of the Brambling at my feeders. Much more timid than the Chaffinches it doesn't stay long and slightest disturbance and it's off. This time it did get much closer so hopefully over the coming weeks it will become more approachable.

The hard weather has brought more birds to the feeders, including a few more surprises. The first new bird was a single Greenfinch, a bird I would expect to see. Next up was a Redwing, obviously attracted in be the apples I have been putting out. The first surprise species was a Grey Wagtail which briefly called in to see what the commotion was about only to be followed by a Meadow Pipit forced from the snow covered fields nearby.