Could a Dream Come True? 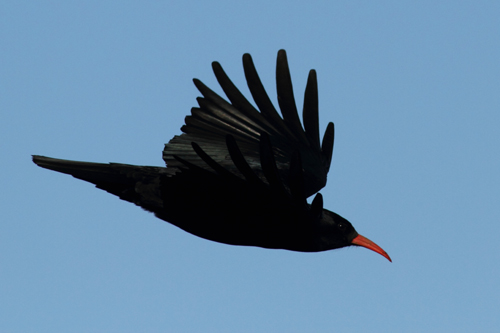 One of Two Chough Seen in North Antrim recently
Here's Hoping
I still remember well as a boy finding my first Choughs on the north Antrim Coast - happily feeding in the sun at the Giants Causeway. Since then we have lost and regained Chough as a breeding species several times. Sadly only one or two pairs have tried to recolonise, most recently on Rathlin Island in recent years.

I have long hoped to photograph this species in Antrim so imagine my surprise on Saturday morning, whilst trying to photograph Fulmars coming face to face with a pair of our rarest corvid. The birds certainly seemed interested in one stretch of cliff returning a number of times before moving off to the nearby fields to feed.

It is not clear if these are the same birds which have been on Rathlin in recent years, but I can only hope this may be a second pair and that perhaps the species can get a toehold once again in Antrim.

I will keep a careful eye over the coming weeks for further activity in the area.

Another highlight of the weekend was three sightings of at least two Merlin on the Antrim coast, including a stunning male at Ballintoy which stayed just long enough for a photograph (see latest images).