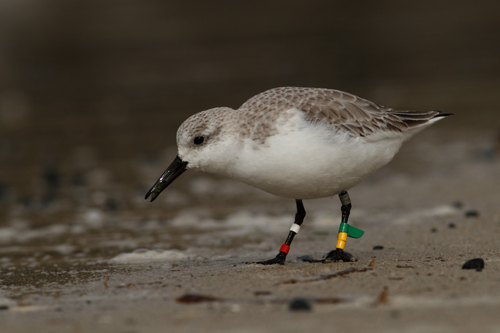 Sanderling, hopefully on it's way back to Iceland
My Friends Travel Log
A few weeks ago I reported a colour ringed Sanderling which I had seen at Portballintrae to the ringing project. I first observed this bird in October 2007 at Portrush and later on the very same beach as I had photographed it recently.

Jeroen Reneerkens the project leader got back to me last week with details of what bird has been up to since my first encounters. The bird was first rung on Sandgerði beach in south western Iceland (about 20 miles west of Reykjavik) in May 2007. Following my North Antrim sightings the bird was observed back at Sandgerði in May 2008. In August of 2008 the bird was seen again this time at Gott Bay, Isle of Tiree, Scotland before moving to the Isle of Barra by early November.

By May 2009 the bird had once again return to Iceland to its regular stop off beach at Sandgerði. On the 19th of August 2009 the bird was once again at Gott Bay, Isle of Tiree, Argyll, but amazingly was reported on the 23rd August at Tréompan, Ploudalmézeau in north west France, near Brest, before returning to Tiree by the end of the month.

Once again it returned to stop in it’s favoured area of Iceland last year before returning to Portballintrae via Tiree last autumn. It is belived that these birds move on from Iceland to breeding grounds in the high Arctic of Greenland, or possibly northern Canada.

This puts into perspective the distances travelled by these amazing little wading birds over their lifetime, putting up with winter storms, frozen beaches and volcanic activity. Especially considering some of this guys relatives may breed in the Arctic and winter in Australia, South America or southern Africa a round trip of some 10,000km! I had a quick look during the week for this bird but Sanderling numbers are much reduced, I can only hope he is seen again in Iceland next month.