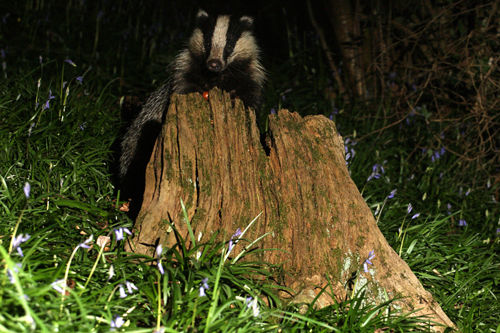 Badger, Ballycastle
New Mammal Species Photographed
For a long time I have wanted to watch and photograph Badgers in the wild. Last year I found a small sett in a wood close to Ballycastle and started putting food out nearby. On many evenings I could hear them and rarely catching a glimpse in the gathering darkness. They would not however come in close enough to photograph. During the time I have been treated to the sounds of roding Woodcock, watched bats feeding inches from my head and a Buzzard chase a Woodpigeon through the trees over my head!

Over the months I have continued to occasionally feed them and allow them to slowly accept me into to their territory. Purposely I am positioned well away from the sett to minimise my impact on their nightly routines.

A spell of good weather and being on holidays for a week has allowed me to spend a few evenings in the wood this week and finally one Badger came into the feeding area whilst I was present.

Not wanting to scare it I didn't photograph it, instead let get used to my, and my equipment’s presence. After a few visits to the food, I release the shutter, the flashguns fired and Badger happily kept on feeding – what a relief. I managed to get about ten images in the near complete darkness, mostly with only half a Badger or of it looking the wrong way before it wandered off.

I returned last night and again the Badger appeared, with others nearby so hopefully over the coming months I will be further accepted and more images will follow.