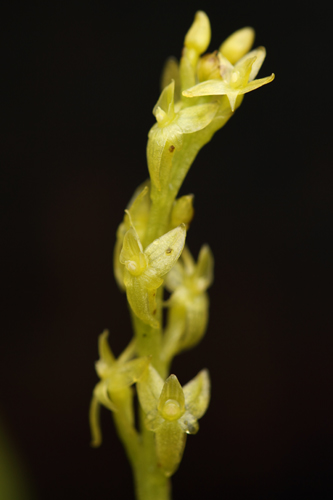 Bog Orchid, Antrim Hills
In search of upland orchids
You may remember me mention last year that a new site for Bog Orchid had been discovered in the Antrim Hills and I that managed to get up, find it (with help) and get a few photographs as well. It was a highlight of last year for me. Well last week when off work I hoped to get up and look for this species again.

As so often occurs it was my last day off and I still hadn’t made it into the hills. To make matters worse the weather forecast was poor and in the morning when I looked out the window the weather was even worse than predicted. Low cloud and heavy rain, not good for the hills.

The thought of the office the next day though was inspiration enough to brave the conditions and get out early in search of what is now my favourite orchid. I parked the car and got all the wet gear I could find on. I then set off into the hills, though fortunately the site in question isn’t too remote.

I quickly relocated the flush in which the Orchids were found last year and started searching. The wet summer so far had certainly filled the flushes and all the good areas from last year were covered in water. Slowly I worked along the flush search for this tiny plant, whilst wiping the rain from my face.

Success! After twenty minutes or so I found one and then a second close by. It was great to see that they were surviving in this site for another year. Almost miraculously the sky began to lighten and rain ease off giving me a brief opportunity for a couple of shots. The Orchid was fresher than the ones I had photographed last year and the overcast conditions probably helped in exposing the pale green colours of the plant.

Once wet I actually began to enjoy walking in the rain and wind, especially when I knew I had re-found the orchid and got a few nice pics, and by the time I had returned the sun was coming out, the perfect end to a week off.