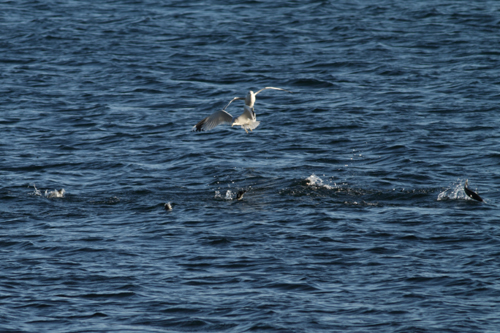 Jumping Fish in the Irish Sea - What Was Going On?
Fun in the Sun
Last Saturday dawned bright and clear. Not wanting to travel to far and with photographic plans for the afternoon I decided to check a few sites on the east coast. Almost as soon as I left the 40mph zone of Ballycastle I got my first photo opportunity – three Buzzards sitting in a road side field. As usual I slowed up with the window down and the camera at the ready. I expected as usual as the car stopped the Buzzards would left and settle on the posts at the other side of the field. This time though the closest bird didn’t it sat for several minutes just staring at me as a got a few shots in the early morning light.

In fact the bird remained until one of the other Buzzards flew over in an aggressive move. Both birds took off slowly gaining height allowing a few flight shots. A great start to the day.

Craigagh Wood was quiet, as it has been for a while now. There was no sign of the Red Squirrels that can sometimes be seen there and only one Jay was observed as flew across in front of car. Again Cushendun beach was devoid of photographable wildlife, just a few dog walkers enjoying the morning sun.

Waterfoot Beach though was a little more interesting. The Sea Buckthorn which grows in the dunes had a nice mix of birds, House Sparrows, Chaffinches, several Bullfinch, Blue Tits and small flock of Long-tailed Tits. One of which remain stationary just long enough to get a nice image captured.

Further south at Garron Point the near flat blue sea was being disturbed by splashes. I parked the car to investigate and was surprised to few dozens of fish jumping out of the sea into the air. The commotion was attracting the attention of the locals gulls as well as me. The fish were not too far offshore and there was no sign of any Porpoise or Dolphins in the area. All of a sudden the activity ceased and sea returned to its unruffled state. Strange!

The final stop of the morning was a brief visit to Carnlough Beach where I was entertained by Turnstones, Redshanks and Oystercatchers. A lone Brent Goose and a few Wigeon were the best the river there could produce. A lovely start to the weekend – some interesting wildlife and some nice weather for a change.