Return of the Goosanders 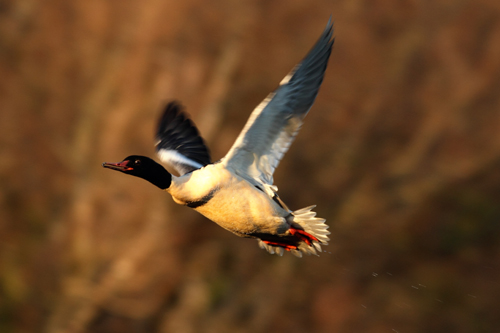 Drake Goosander, North Antrim
Wintering Sawbills Return
Last winter was a special one for one of my favourite ducks – the Goosander. This species has never been more than a very scarce winter visitor but in recent years numbers have begun to increase with some birds returning to regular sites. The hard weather last year however forced many more of these stunning birds from their regular wintering grounds to North East Antrim, with double figures to found along the coast and in the rivers.

One such bird is a drake which for at least five years has returned to river in Ballycastle. The bird favours the area alongside the clubhouse for local golf course and river upstream of here. It is strange location for this individual because it is one of the least tame Goosanders I have come across and this quite a public site, therefore the bird is often seen flying upstream or out to sea wasting valuable energy reserves.

Once again this winter the bird has returned and once again my challenge to get a decent image has begun. Just occasionally the bird can be approached reasonably close but more often than not it just swims off. It is more likely for me to get a flight shot of the bird when it has been disturbed by a dog or kids skimming stones over the river. Though give the tree cover in the area there is rarely much light to work with. Just occasionally, though the parameters come together and a decent image can be got, for example this shot which I got last week.

Even when the Goosander doesn’t play ball there is normally something around to keep the camera active. Grey Herons are regular visitors with the Mallards and gulls, while Dippers and Grey Wagtails are relative frequent. Occasionally the blue flash of a Kingfisher can be seen though this species seems to have hit very hard by last winter up here. On a couple occasions I have even seen Otter here and on one memorable occasion a Red Necked Grebe swam up the river and proceed to swim around me for several hours.