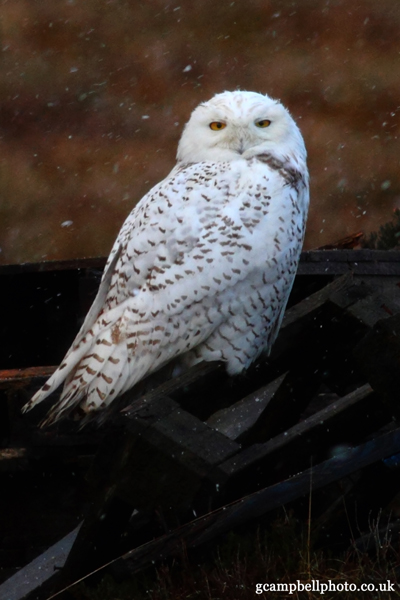 Snowy Owl, Altikeeragh NNR, Co L/derry
Apologies for the lack of updates
Sorry for the lack of updates over the past few weeks. Things are very busy at home and work and I haven't had time to work on the website. As way of an apology and until I get back online I have put a few recent images onto the Latest Images Gallery. They are worth a look there is some stunning wildlife about at the moment!

One bird that has sadly moved on though is the Snowy Owl which was seen for a few weeks at Altikeeragh NNR in February. The bird was reported to have disappeared amidst accusations of inappropriate behaviour by so called wildlife photographers. I didn't see the activity but it is alleged that the bird was being deliberately disturbed in order to get flight shots. I hope this is untrue!

The attached shot was obtained by lying on a peat bank in the heather for several hours, from before sunrise, and letting the bird come close to me. It was very cold (hence the snow around it) and uncomfortable, and I ended up with the flu, but the bird’s welfare must always come first.

On a number of times during it’s stay I was told that “Snowy Owls are very approachable”, and from experience of the species they certainly can be, but that does not mean that all Snowy Owls will not be disturbed by close approach. Care must always be taken when attempting to get a close image of any individual bird. If you accidently disturb it, get out of the area immediately and let the bird return to it’s normal behaviour.

This for me though is not the real issue. Snowy Owls are a bird of prey and their prey species is often very wary, especially with such a master hunter in the area. If there is constant disturbance in the area then the bird will find it very difficult to hunt. Not surprisingly the bird did seem to leave briefy. However it returned for at least a few days during which time I was able to observe it from a safe distance, watching it’s movements and devise a plan to get this shot which would cause no disturbance to the behaviour of the bird – though a dog walker did scare it from this perch only a few minutes after it landed. This was pity because the sun came out a few minutes later:-(

For this reason I, and I know a few others, did not put out the news of this magnificent birds brief return to Altikeeragh, and I’m sorry to those who didn’t get to see it, but as stated above the bird’s welfare must always come first.