A Tale of Two Herons 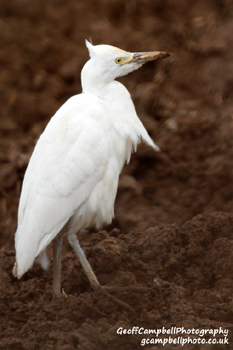 Cattle Egret, Co Donegal
First Twitch of 2013
I visited County Donegal in the hope of seeing and photographing two members of the heron family, both very rare visitors to these parts. Earlier in the week a Bittern had been seen and photographed at Inch Lake just across the border into Donegal, whilst nearby a Cattle Egret has been present for a few weeks. These two attractions plus the other birds this part of Donegal was too much for me to resist. As Saturday came closer the weather forecast continued to deteriorate - as usual. Why do they pretend they can forecast the weather when they can barely tell me what the weather is actually doing now!

I have seen a Cattle Egret in Ireland before, but not Bittern, so it was first on my itinerary. I arrived at Inch Lake before first light with the hope of photographing the Swans and Geese as they departed, I just hoped for a nice sunrise to make up for what promised to be a wet end to the day. Sure enough an area of red sky appeared behind the hills to the southeast and slowly the swans and geese livened up from their roost. Unfortunately most of the birds went in the wrong direction for my photographs, but small parties occasionally would fly against the fiery sky.

As there was now enough light to check the lake shore for the movement which may give away the shy and elusive Bittern. Instantly my eye was drawn to movement in the water as an Otter only 20m or so away went about catching small fish for breakfast. I watched this for a while and then remembered, Bittern to yes that’s what I’m looking for. I checked the trees above the reeds in case it was roosting there, but no sign. Later more birders arrived and some of the locals who had seen it earlier and helpfully told us where it had been seen, but still not Bittern. By mid morning I decided there is only so long you look at the same patch of reeds. So with other birders on guard I travelled the 10 or so miles to St Johnston in search of a pig field. This egret seems to have a preference for pigs rather than cows.

As quickly as saw the pigs I spotted the white bird amongst them – success. Photographing it though would be less easy, it appeared very wary, but with persistence I managed to get close, though the light by this stage was appalling for photography. With the ISO turned up I managed to approach along the field edge for some reasonably shots.

Another hour at Inch on the way home, by which time the rain was much heavier and then admit defeat and head home. Missed the Bittern, but still a great day out with some nice pics. Not a bad start to 2012.