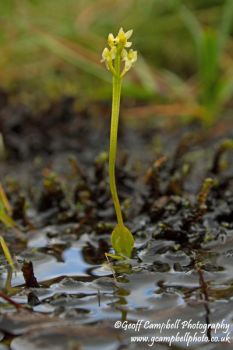 Bog Orchid growing wild in the hills of Antrim
The selfish acts of the few
This week I heard of unconfirmed allegations of the digging up of a number of rare orchids along the north coast of Northern Ireland. If true not only was the act likely to be illegal under the Wildlife (Northern Ireland) Order it is, in my opinion highly immoral. Our flora and fauna is under enough pressures from disturbance, development, agricultural practices and nutrient enrichment from many sources without such blatant acts of environmental criminality.

I would be the first to acknowledge to beauty of these plants, but part of that intrinsic splendour is the natural habitat in which they occur and reproduce for future generations to enjoy. The selfish act of removing them, possibly to grow pot in someones garden has a real costs for us and our children. If true this would not be a isolated incident, the Bog Orchid (see image) became extinct in Norfolk in 2001 when the last plants were taken, in a night time raid, from a nature reserve. King's Meadow Nature Reserve in Nottingham also had southern marsh orchids stolen in 2007 and rare Dark Red Helleborines were dug up in the Peak District in 2008. The UK's rarest orchid, the lady's-slipper orchid, receives round-the-clock police surveillance where it grows on a Lancashire golf course after an attempt to take it in 2009.

It is believed that there is a commercial value to orchids ranging from £100 to many £1000's, whilst commercially produced seeds can fetch hundreds of pounds for a few grams.

In the past I have received criticism for not divulging the exact locations of many of my images, but these threats are the main reason why I don't, and I feel we as wildlife watchers and photographers must take responsibility for the information we put into the public domain.

It is such shame that selfish individuals who are willing to steal such beautiful flowers from their natural habitat and deprive others of their beauty. I would urge anyone who sees or hears of such acts to inform the PSNI and Northern Ireland Environment Agency as soon as possible.

For more information on wildlife law click the link below:
Wildlife and the Law...