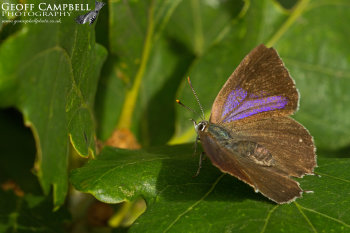 Catching up with the fun in the sun
Apologies for the lack of updates, but with one of the best summers I can remember it has been a case of making hay while the sun shines. It's been a hectic few months with a family holiday to the highlands of Scotland and camping weekends to Wexford, Donegal and Fermanagh. Combine this with keeping up with my local wildlifes goings on, work and family life there has been little time for my poor neglected website. Over the coming months I will try to do a number of updates from the summer, starting with this real highlight - my first images of the rare Purple Hairstreak butterfly.

This is the last Northern Ireland butterfly species I had left to get an images of. Over the years I have tried many times, I have seen them in Counties Fermanagh, L/derry, Wicklow and Wexford, while checking unsuccessfully in my local oakwoods, but always they where, as the normally are, high in the canopy of large oak trees. In fact I had the pleasure of watching several dance in the canopy of oaks at Edenvale, Co. Wexford earlier in this summer, but was unable to get a decent image. A nights camping at Crom, County Fermanagh, with my son offered a last opportunity for 2018 to catch up with this elusive species.

Arriving on the Saturday afternoon in partly cloudy conditions failed to produce any sighting. Was I too late for this year? Numerous Peacocks and Silver-washed Fritillary, sighting a Great Spotted Woodpecker and night walk with my son and a bat detector did soften the disappointment greatly. On Sunday after we collected and sorted moth traps, had breakfast and packed up the tent we tried again, at what I had been advised was a good area. With the sun only breaking through for a few seconds at a time there was still no sign of the target butterfly. Just after lunchtime though the sun appeared and within minutes I found a female slowly making her way down the tree. At about 3m up I watched as she would repeatedly lay an egg in the base of a bud, before sunning herself on a leaf, each time getting lower in the tree. Eventually she got down to eye level and proceeded to put on a superb I could have only dreamt off, giving opportunities to capture first the under-wing, before angling herself to the sun and opening her wings to show where the name Purple Hairstreak is derived - stunning!

Hopefully this will not be last encounter with this beautiful species, it certainly will not my last visit to Crom! 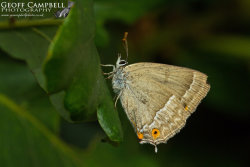 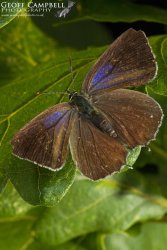