A Day in North Donegal Part1 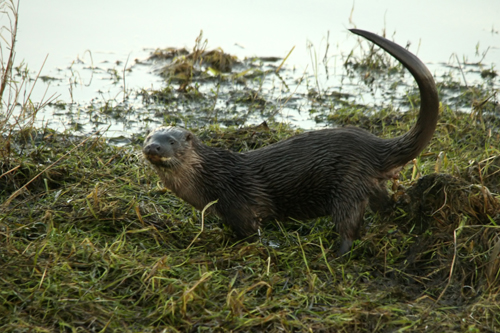 Otter spraint marking it's territory
Rare Goose but distant Otters
I travelled west to Co. Donegal with the aim of photographing a family of Otters I have been watching for a while now. Leaving Ballycastle in the dark and light rain prospects for photography didn't look good. By the time I crossed into Donegal the rain had stopped but 90% cloud cover was going to be a problem.

My mood lightened as one of the first birds I observed was a rare Snow Goose mingling with a large flock of Greylag. This bird has been present in this area of Donegal for several months but it's current location is allowing closer views. With little or no usable light photographing it was out of the question - so time to move on to the otter site.

Despite extensive searches of the usual hang outs I could not locate the otters. With one final scan of the lake on the way back to the car I saw movement on the far shore - two otters but very distant. They were feeding and playing but showing no intention of getting any closer in the near future, so I had a decision to make. Stay and wait in poor light and hope they got closer or travel further north to Fanad Head and hope the weather was better and wildlife was closer.