A day in North Donegal Part 2 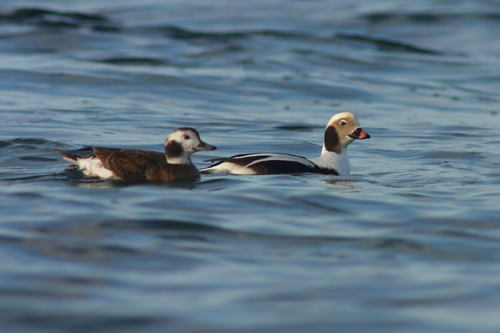 Long tailed Ducks, Fanad Head
Seaducks in the surf
North it was. I made the hour long journey through some of the most beautiful scenery in Ireland to the top off Fanad Head.

The primary aim of this visit was to photograph what I consider the most attractive duck species - the Long tailed Duck. Almost 60 of these seaducks regularly winter off the north Fanad coast, occassionally feeding close to the shore. On arrival at the beach the weather was still overcast but brighter, however the calm conditions meant the swell was relatively low for this very exposed site.

A quick walk along the beach to see if any of the ducks were close to shore was positive, a couple of quick trial shots then a wait for the light to improve. Walking back to car I noticed three birders scannning the bay with scopes. A quick chat with the guys who had travelled from Cork confirmed the continued presence of an Eider showing charactistics of the North American race dresseri in the neighbouring bay, though it had been observed swimming east and further offshore.

I quickly drove around to Glasagh Bay set up my scope and seen several distant flocks of Eider. Nothing else for it I was going to have to walk around the shore to get closer. By the time I reached the next bay the birds had moved closer inshore and I was able to get reasonable views of this very rare visitor. Not close enough for photographs though.

By this stage the cloud was breaking up and the time I returned to the Long-tailed Ducks the sky was almost cloud free, and two duck remained close to shore , feeding for amost half an hour whilst I waded into the surf to get some shots.