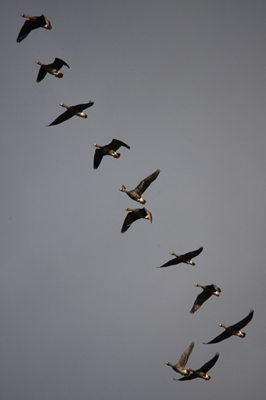 Greenland Whitefronted Geese, Donegal
First Summer Migrant
I spotted my first summer migrant today, not surprisingly a Sand Martin, normally one of the first species to make the journey north.

This individual was being blown along on a brisk wind at Inch Lake, Donegal, flying over large flocks of Whooper Swans and geese preparing to leave Ireland to their northern breeding grounds. Whilst I was there several Greenland Whitefronted and Greylag Geese flocks took off flying purposely in a north-westerly direction.

The Barnacle Goose flock on Malin Head has greatly reduced in numbers and Chough were clearly pairing up for the breeding season with at least four pairs seen.

There will soon be a time of clear change in my photography interests. Many bird species are becoming more secretive as nest building commences, and I do not enjoy nest photography and the potential risks of disturbance.

More and more bees are on the wing and won't before the first butterflies and dragonflies make an appearance, and these will keep occupied for a few months.