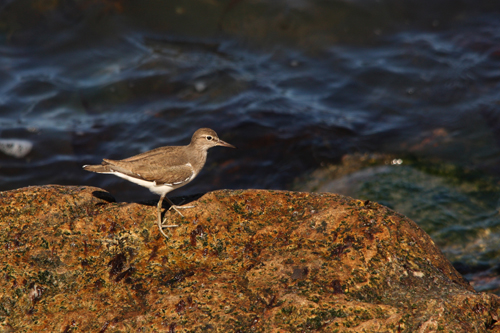 Common Sandpiper - Ballycastle
Another bright and sunny afternoon on the North Antrim coast. I had an hour before lunch so visited the nearby Ballycastle Coalfield. As the name suggests this is an important geological site, being a mining site in the past. Infact it was the final area of commercial coal extraction in Northern Ireland, the last mine closing in 1967. It contains a series of Carboniferous sedimentary rocks (335-330 million years old) with contemporary lavas and younger Tertiary igneous rocks (60 M.y.).

Fossils that have been found include goniatites (shellfish), fish remains, giant clubmosses and arthropod insects. The Tertiary dykes have metamorphosed the carboniferous shales to produce porcellanite and a range of minerals.The site also contains evidence of early industrial activity: the coals and iron ores were mined between the 16th and 19th centuries.

Being on the coast it is also an important wildlife area and personal favourite local patch. Today I was greeted to good views of five Eiders feeding in the surf close to shore (see latest images gallery). Whilst photographing them I was heard the unmistakable call of a Common Sandpiper as it land on the rocks below me. A few seconds later it was joined by a second, both bobbing almost continuously as they fed on insects.

Also present was a single Whimbrel, stopping off on it's migration north.