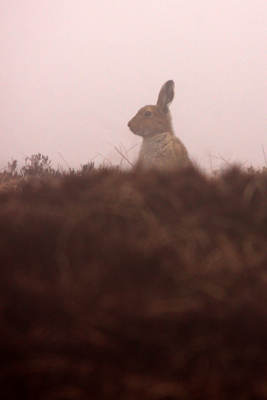 Irish Hare in the Mist
High Point of the week
This week I had the chance to spend some time on the Antrim Plateau, on top of the Antrim Hills. Up there is about as close to wilderness as can be experienced in Northern Ireland.

I set out in beautiful conditions walking up the step valley sides towards the flatten top of the hills. After an hours walking though as reached the top as if from nowhere a dense mist set in with visibilty dropping to less than 50m. This always heightens your senses, it was almost silent with the Skylarks and pipits going quiet and with all flights cancelled in the UK it was a strange sensation. Out of the mist an Irish Hare popped it's head above the heather, obviously having not seen me earlier. It froze and so did I, before managing to get a couple of shots before it made off into the grey cloud.

After about an hour the mist lifted and dissappeared as quickly as it arrived. A total of ten Hares where seen as well as 4 Red Grouse and 2 Peregrines. I will hopefully be back up in the hills during the coming weeks.