More Whimbrels at The Coalfields 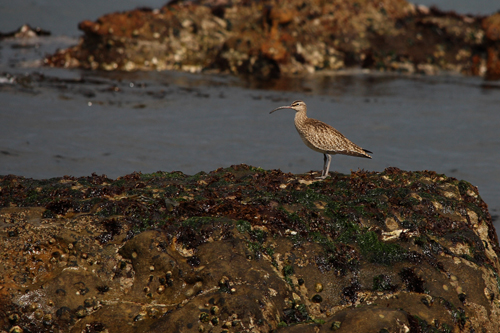 Whimbrel, Ballycastle
Migrant Waders on the Increase
Whimbrel numbers have steady increased at Ballycastle Coalfields during the week with more than forty present today. This mirrors what I observed last spring when the birds remained for several weeks with numbers building to over seventy. So perhaps Ballycastle is an important stopping off point for the birds moving further north to breed.

The Whimbrel's distictive call is often associated with a Celtic superstition of the 'seven-whistlers', supposedly a group of six birds looking for a seventh - hearing the call augured death or other disaster. Thankfully there are more than six around at the moment!

The Common Sandpipers found last weekend have also remained and Eider numbers are increasing with at least seven pairs hanging around the rocks and bays. Swallows, Sand and House Martins, Willow Warblers and Wheatears are all now commonly seen along the North Coast, though I'm still waiting for my first Swift to reach this far north.