April Goes Out in Style - Part 1 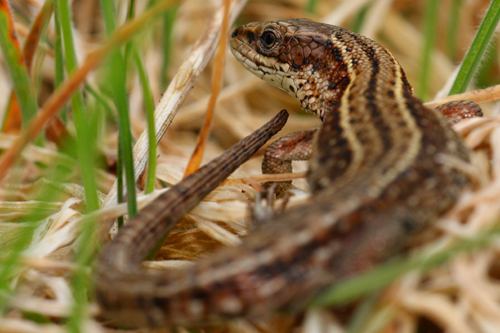 Common Lizard, North Antrim
The last week of April throws up some special wildlife
Ill health has kept me close to home this week and it worked out well. I was forced to slow things down in the first half of the week after ending up in hospital last Saturday.

It gave me a chance to spend time at a few of my favourite spots around Ballycastle. The Coalfields has a road around most of it so as I able to sit and watch the world (and birds)go by.

My first reward was a Osprey seen briefly above the cliffs moving east towards Fair Head, probably on it's way to Scotland.

Next was my first Great Skua of the year harrassing the local gulls, whilst I sat a few metres from displaying Eiders.

By the the second half of the week I was feeling a little better and returned to work. Fine evenings though allowed me out for a bit of fresh air.

A visit to a nearby cliff top car park produced little by way of birds, and still not on form for a hike down and then up the numerous steps to the base of the cliffs I was forced to spend time around the cliff top area.

This area has been good in the past for Lizards and sure enough only about 20 metres from the car was a very confiding Lizard making the most of the evening sunshine. I was able to approach to less than 50cm using a macro lens.