April Goes Out in Style - Part 2 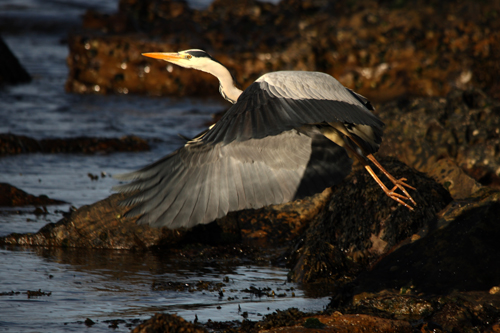 Grey Heron, Ballycastle
More Spring Highlights
Friday evening was calm, warm and sunny. In the evening I went for a walk at the Coalfields with my wife and son. We were greeted to plenty of Eider, a pair of Goosander, Ringed Plover on a nest on the shingle beach and migrant Willow Warbler feeding along the seawall.

Whimbrel numbers have reached well over 60 now scattered along the rocky shore. With them was a lone Grey Heron, so intent on catching its prey it didn't notice as I approached to close range. It continued to feed close by until deciding to fly right past me to another rockpool.

The highlight for me though was a Buzzard being chased by the local cliff nesting Jackdaws. For several minutes we treated to aerial acrobatics until the Buzzard finally gave up and moved on (See latest images gallery). It's hard to believe that in the early 20th Century it was extinct in Ireland before re-colonising in North East Antrim. From here it has spread in the last few decades and now they can be seen in almost every county of Ireland.