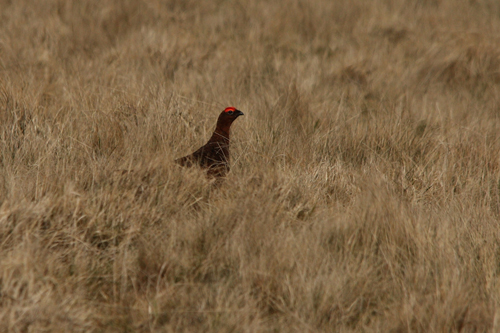 Red Grouse, Antrim Hills
Raptors galore
Today I was lucky enough to be in the Antrim Hills. The cool spring weather continues though there were plenty of dry sunny spells during the day.

A short hike into the hills above Glenarm produced a hunting male Hen Harrier and a cracking cock Grouse. Grouse in Ireland at generally at much lower densities than those in England and Scotland and in my experience at lot less approachable.

Following this travelled to nearby Hen Harrier hot spot to see if there was any activity and was almist instantly treated to male bird swoop down in front of my car and then hunt across the bog beside me. A few minutes later it reappeared with prey. A few hundered metres down the road was a male stunning Merlin sitting on top of a tree. Retracing my route back up hill then produced a female Merlin which was then met by the male. Suddenly a female Kestrel passed by and an aerial battle between Merlins and Kestrel ensued. A hunting male Merlin, two buzzard and Sparrowhawk completed an wonderful 30mins birding.