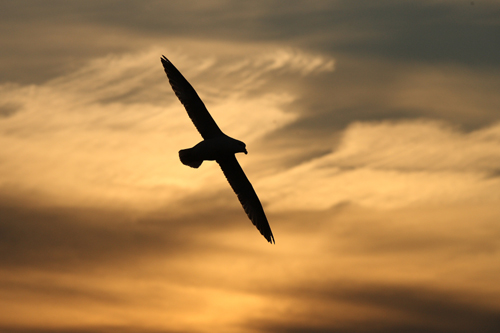 Fulmar, North Antrim
Summer evening on the North Antrim Coast
This evening I got the chance to try get images that I had planned in my head for some time. As the sun started to go down it was clear that there was going to a stunning sky to act as a back drop for a seabird I always love to photograph - the Fulmar.

Fulmars are relatively common on the North Antrim cliffs and as you walk the coastal paths they have a habitat of flying close by checking you out - always a great chance for a photograph. It is hard to believe that they where first proved to breed here in 1921. There are now over 33,000 pairs around Ireland.

It's name is derived from the old Norse for Foul Gull (mar) given it's superficial gull like appearance and the foul smelling stomach oil used against predators and as a food source for young. Fulmars are much more closely related to albatrosses and petrel than to gulls.

This is only one of a series of images I managed to get before darkness set in.