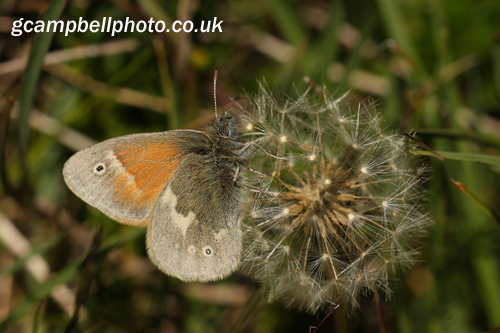 Large Heath, Antrim Plateau
As Close to Isolation as Possible in Northern Ireland?
This week I got the opportunity to spend a day in one of the last few relatively untouched parts of Northern Ireland - the Garron Plateau. Whilst only rising to 360m the steep valley sides of the Antrim Glens has left this area undeveloped and offers a rare chance for solitude.

The plateau is covered with blanket bog with several small loughs making it home to a range of rare upland and peatland species.

In terms of birds there were clear signs of Red Grouse, with numerous Meadow Pipits and Skylarks singing. Hen Harriers frequently hunt in the area but none were seen on this occasion.

Many butterflies were on the wing, with numerous Small Heath and at least eight rarer Large Heath seen.

Insect 'eating' sundews and common butterworts together with flowering cranberry and numerous Common Spotted and Heath Spotted Orchids were recorded.