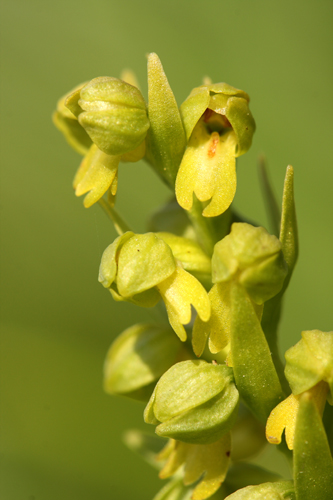 Frog Orchid, White Park Bay
Frog Orchids and other gems
White Park Bay, lies on the North Antrim Coast and as well as offering stunning landscapes and fine sandy beach the rich diversity of habitats in such a small area makes for a wonderful floral display.

It is also one the best places to see the beautiful blue flowers of Meadow Cranesbill. This native plant is confined to a stretch of the coast between Dunluce Castle in the west and approaching Ballycastle in the east. Wood Vetch and Fragrant Agrimony can also be found on this site.

At least 13 species of butterfly have been recorded together with a host of other invertebrates. Fulmar nest on the cliffsm whilst Whitethroat nest amongst the scrub areas. Common Lizards may also see in the dunes.