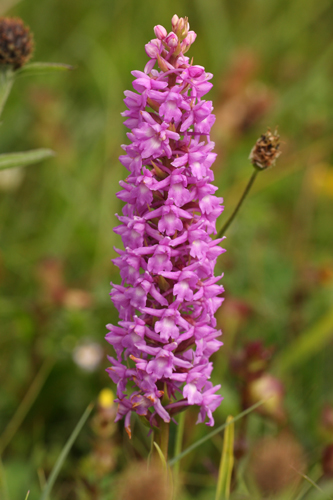 Fragrant Orchid (densiflora)
Fragrant and Frog Orchids everywhere.
I decided to my widen my Orchid to north Donegal yesterday. I set out early with the weather looking less than promising. By the tiem I hade crossed into Donegal the rain had eased but it was still overcast. Having already decided to the northern part of the Inishowen Peninsula I made my way to Carndonagh, where I was met by a torrential rain storm - had I made a bad choice of location.

Minutes later the rain ceased the sky lightened and I drove through the Isle of Doagh I knew there was no mistake. Field after field of orchids - Pyramidal and Common Spotted Orchids were just past their best, but the display of Fragrant Orchids was stunning. Many of those seen displayed the characteristics of the densiflora subspecies. Almost everytime I got down to lie on the ground to get a photograph I would find Frog Orchids and small examples of Common Twayblade. Wetter areas had Marsh Orchids and the remains of several early species could also be seen. All these species could be found within metres of roadside. One field was so rich in orchids it was difficult to walk around it whist avoidung damaging them.

Photographing them was a challenge, although by mid morning the sun had come out the wind remained strong and gusty throughout - I know how the golfers at St Andrews felt!