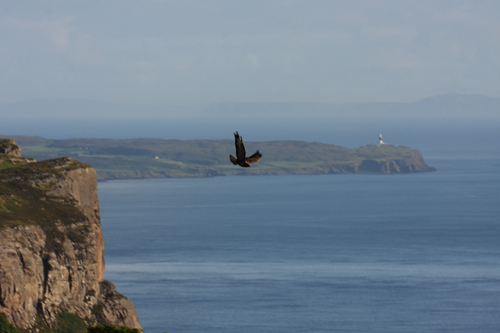 Buzzard Soaring Over Fair Head
Ecological Success Story
Decline in Buzzard numbers were first noted in the mid 1800's. By the early 1900's the species was or was almost extinct as a breeding bird in Ireland.

During the 1930's the species naturally recolonised, probably from Sctoland in the North East of Antrim (firstly to Rathlin Island in 1933) and by the mid part of the 20th centuary the population was at about 10 pairs.

The introduction of Myxomatosis caused a crash in the rabbit population and again the breeding buzzards were lost.

By the 1970's though they were again to be found in the north of Ireland - North Antrim again bein the stronghold. By the 1990's, at least partly due to the banning of the use of poisions such as Strychnine the population in Northern Ireland was over 200 pairs widely distributed. By 2005 breeding was occuring as pair south a County Cork and they are believed to breeding in at least 18 counties.

They are now the most commonly seen raptor over much of Ireland, gradually recolonising their former range.