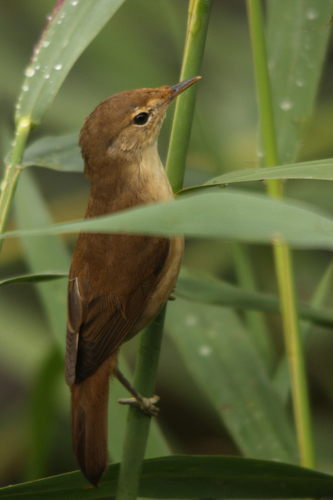 Reed Warbler, Co Armagh
Scarce Breeding Warbler Photographed
I meeting in the morning in Co Armagh gave me a chance to have a quick lunch break at Oxford Island. Constant rain in the morning finally began to lighten to a mere drizzle (Irish summers are great!) by the time I finally got lunch close to 2pm.

I was instantly greeted by several families of Sedge Warblers (see latest images) and while tried to eat my lunch and use the camera at the same time up popped a Reed Warbler - a very scarce breeding bird in the north of Ireland. Luckly it sat up well on the reed grass allowing me to get a few images despite the poor light.

Just as quicky it disappeared into the tall vegetation. I continued to watch the Sedge Warblers, Reed Buntings, Great Crested Grebes and ducks and just as I was about the leave some 15 mins later it appeared again. This time with a second bird and closer to the hide, and although the light had improved it was a challenge to get a good image as the bird moved amongst the reeds.

This is one of the better images I got - more will be posted in the latest images gallery.