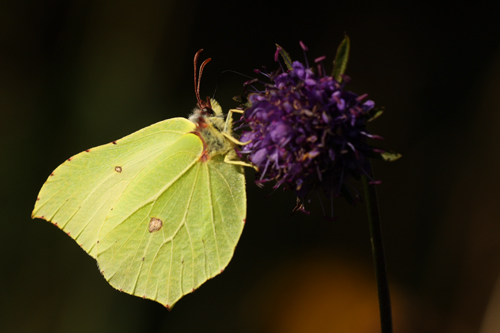 Brimstone, Co Kildare
New Butterfly Photographs
One of the species I set myself a challenge at the start of the year to photograph was the Brimstone butterfly. This is a species that for a time was found in Northern Ireland but has not been recorded in its former haunts in Fermanagh for many years.

This meant travelling south to see them. The species is more frequent in the west and the midlands of Ireland where the main larval foodplants Purging and Alder Buckthorn are found.

The species extends eastward into Kildare, and it was to here I travelled to on the Bank Holiday Monday to find and photograph them.

On the way I stopped at Portmarnock in north Dublin to see Glossy Ibis which have frequented a grassy area on the edge of the main road. Unfortunately only one was seen and it was far out on the nearby estuary, so no chance of photos. A quick walk at North Bull Island which looks like a wonderful orchid site to visit next summer.

Onwards to the Bog Allen Nature Centre in west Kildare. Arriving at the car park a Brimstone flew past over the buildings which was a good sign. I followed the directions to the main butterflies sites and within a few minutes I had found at least eight Brimstones feeding on Scabious and Knapweed at the side of the track. Also present were Peacocks, Small Tortoiseshell, Small Copper, Common Blue, Speckled Wood, Large and Green veined Whites and Meadow Brown. The area is one of the most important in Ireland for Butterflies in terms of species diversity and numbers.

Out on the bog more butterflies were seen, as were large numbers of dragonflies, including Moorland, Migrant and Amber winged Hawkers, Common and Black Darters. A cuckoo and sparrowhawk were the birding highlights from the bog.

A very enjoyable trip, and plenty of photographs. I will set up a trip gallery soon.