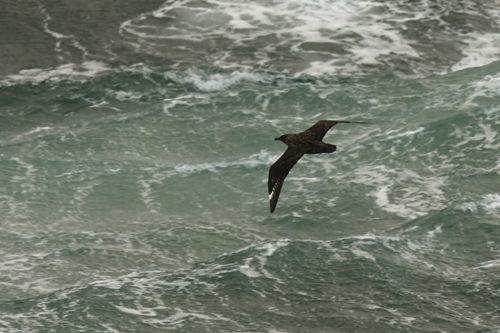 Great Skua (Bonxie)
Plenty of birds - very few images
I have been pretty lucky recently with good weather coinciding with good wildlife, so you have to expect a day when not everying comes together.

I decided to visit the Inishowen in Donegal for the day. I set off reasonably early in good weather conditions arriving a Inch lake before 8am. In the previous days up to 18 Black Tern had been reported but when I arrived they couldn't be found. There was plently of wildfowl with Teal, Mallard, Wigeon and Tufted Duck numbers building up. A small flock of Knot joined Black tailed Godwits and Dunlin. As I walked east along the lake shore I scanned the far shore finding a juvenile Little Gull. As I watched it three juvenile Black Terns joined it dip feeding on the opposite shore. Three Ruff were also noted and also of interest was good numbers of Meadow Pipit to follow those seen at Torr Head yesterday.

From here I set off north towards Malin Head stopping off to look for interesting waders at a number of points without sucess. On Malin Head a checked around some of small lochans and areas of scrub again without success. I set off to look for Lapland Buntings around the headland itself but a quick look out to sea showed a reasonable passage of seabirds on a westerly wind. Almost immediately I picked up a close in Great Skua or Bonxie and an even closer Grey Phalarope. Over the 90 minutes there was another Bonxie, 2 Arctic Skua, 1 Sooty Shearwater, 1 Balearic Shearwater, 17 Manx Shearwater and numerous Gannet, Auks and Fulmar.

I returned to Inch on my way home having failed to locate any Lapland Buntings. By this time all the Black Tern and the Little Gull had left though 6 Ruff were now on show. Attempts to find anything unusual at Lough Foyle and at the mouth of the Bann were cut short by heaving persistent rain showers. So plenty of good birds but few close enough to photograph.