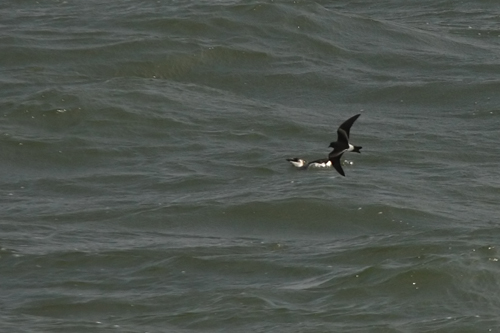 Leach's Petrel, Ramore Head
North westerlies bring in Seabirds
On Wednesday evening and Thursday morning I had the pleasure of spending some time on Ramore Head, Portrush in strong North Westerly winds with squally showers - yes the pleasure. It is these conditions that push the proper seabird species close enough to shore that birders can see them.

Whilst neither the evening or morning were classic seawatches impressive numbers of Great Skua and Leach's Petrels passed westward with supporting casts of Storm Petrels, Arctic Skuas, Arctic and Common Terns. Gannets of various ages dived for fish just offshore.

Highlight seabirds birds for me though were a couple of Black Terns, a Little Gull and three Sabine's Gulls.

At the East Strand car park in Portrush the adult Ring billed Gull has returned for another winter.