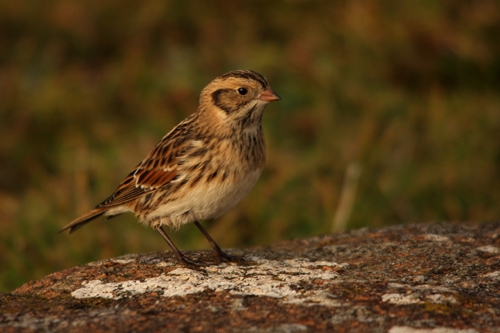 Lapland Bunting in Late Evening Sun at Ramore
Evening Photoshoots 1
Opportunities for wildlife photography were limited this week with work, sports and family commitments. I did get out on two evenings though on the way home from work.

Tuesday evening involved a dash from the office in Belfast to Portrush in the hope of getting images of the Lapland Buntings at Ramore Head. I hoped that as the sun dropped it would appear from behind the clouds and bathe the area in some warm light.

When I arrived I found just one bird present and a lot of cloud. I waited and as I hoped the sun appeared and bird behaved allowing close approached whilst it hopped on and around the rocks at the end of the headland.

By the time I'd finished photographing this enigmatic little bird the light had deteriorated so the planned stop at a nearby wader roost was pointless.