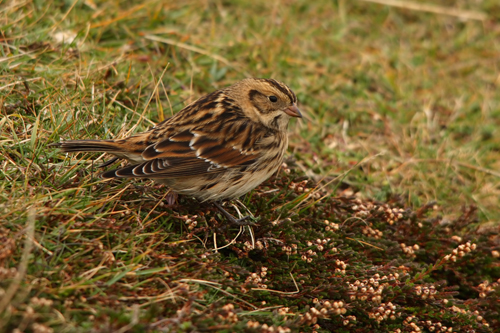 Lapland Bunting, Ramore Hd
Birding the North coast of Ireland - Part 1
A forecast of clear skies on Saturday morning didn't materialise. So already I was having second thoughts about a trip to Rathlin Island to look for migrants. When I arrived at the ferry terminal only a few minutes from home I was only partially disappointed at being told that the ferry being fully booked.

So quickly back to the car and over the Ramore Head at Portrush, to look for Lapland Buntings. I wasn't disappointed finding four very quickly. It was very windy and overcast so photography wasn't going to be easy. Even less so when I started using my main camera to find it had developed a shutter fault. When a dog disturbed the birds they took to the air above me, but I was surprised to see another five birds rise from close by and join them.

I took the chance to return to the car get my back up camera body. When I returned to head all nine birds were busily feeding on grass seeds. The birds remained for about 15 minutes before five lifted and flew east towards Portrush East Strand. I remained to photograph the four that remained. At times I could approach the birds to within a few metres, but in the tall grass it was difficult to get clear photographs.

A wheatear was also at Ramore and the Ring billed Gull was at the East Strand car park.