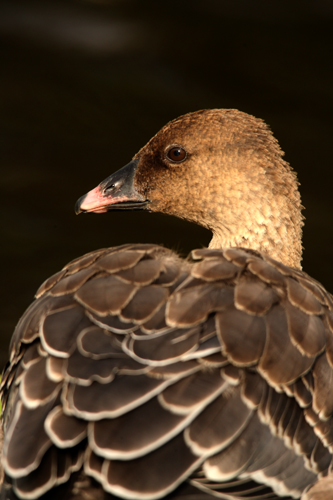 Pinkfooted goose, Ballymena
Birding the North coast of Ireland - Part 1
This week say a trip to the north west corner of Ireland - Bloody Foreland in seach of rare birds. Our usual trip to Tory Island was postponed as conditions were far from ideal and staying on the mainland would allow more options.

Meeting in the morning at Inch was positive with at least two Chiff Chaffs, three Black Terns and a Ruff.

From here a dash to Bloody Foreland to check the gardens with no sign of any migrants in a strong North Easterly wind. Out on the short sward of the headland it was hoped we would find Snow or Lapland Buntings of possibly a Buff breasted Sandpiper - but not this time. We made do with Chough, Rock Doves, Ringed and Golden Plover. Even seawatching was uninspiring with just Gannets, Auks and few Manx Shearwaters.

The decision was made to try somewhere else, especially some of small estuaries. Magheroaty and Dunfanaghy were both quiet with a few Wheatears and Bar-tailed Godwit. Heading south Blanket Nook looked more promising with plenty of birds, but despite much effort north better than a Barnacle Goose and 45 Greenshank were forthcoming.

The final stop was Myroe levels, Lough Foyle in the hope that the Buff breasted Sandpipers present the previous week would be about. Again we dipped out - a Ruff and 2 Curlew Sandpipers and a late Sand Martin were seen.

A long day in the field with little in return in terms of rarities and photographs, though it was fun looking for something different.

So few photographs were taken that I have had to attached a photograph of one of two Pink footed Geese at the ECOS centre, near Ballymena, Co Antrim the next day!