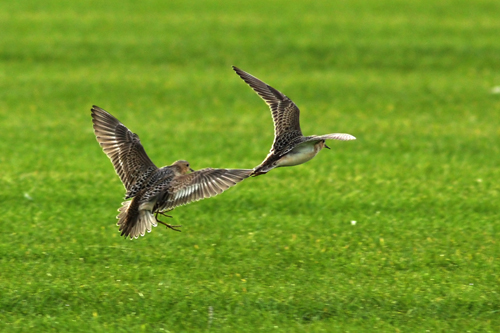 Buff Breasted Sandpipers Land At Myroe, Co L/derry
Lucky Escape for Sandpiper
This morning I went for early visit to Lough Foyle in an attempt to photograph a trio of rare Buff Breasted Sandpipers. This species can be amazingly tame allowing close approach and photographic opportunities. The poor weather on Saturday meant I delayed this visit, despite information that the birds could be approached to 7 feet! Sundays trip though it was going to be against the clock as needed to be home by lunchtime.

When I arrived the birds were nowhere to be seen. I checked all the turf fields at Myroe and found a Curlew Sandpiper but not my main quarry. I final check of the field the birds were present the day before in and jackpot – two Buff Breasted Sandpipers. I parked the car and got my cameras ready. I looked over towards the turf field – disaster the birds had taken off and were flying east. I made my to edge of the field they had been in and waited. After a few minutes three waders flew towards me and then landed only 20m away. They were all Buff breasted Sandpipers. I decided to wait my ground so as to let the birds settle and begin to feed before trying to approach them. I could also see a break in the thick cloud cover approaching. After about 10 minutes the birds had settled and were actual getting closer to me. The light was improving, it all looked good.

Then as if from nowhere a female Sparrowhawk flew from over my right shoulder straight at the sandpipers. They all took to the air, one narrowly avoiding getting taken, before flying high and to the west out of sight. I waited for 45 minutes for the their return without success and realising the time and the fact the birds if they did return would take some time to settle I decided to leave.

A brief stop at the mouth of the River Bann at Castlerock produced two Black Terns and a Red throated Diver and two Harbour Porpoise.