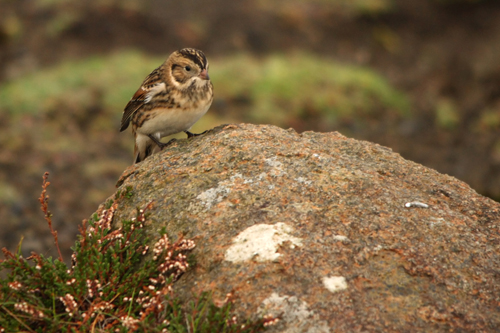 Lapland Bunting, Ramore Head, Co Antrim
Northerly Airflow Aids Migrants
An early morning visit to Ramore Head paid dividends with a build up in the Linnet flock and two Wheatears on the shore. A walk up onto the headland quickly resulted in a Snow Bunting, which unfortunately seen me before I seen it amongst the rocks. Snow Buntings regularly occur here in autumn on their passage south from their breeding grounds in the north.

It flew up on top of the Ramore Head. I slowly made my way up and quickly relocated the bird. As I started to photograph it another, smaller bird flew in alongside, a Lapland Bunting.

The Lapland Bunting is a much more scarce migrant and rare winter visitor to Northern Ireland.

A photograph of the Snow Bunting has been included in the latest images gallery.