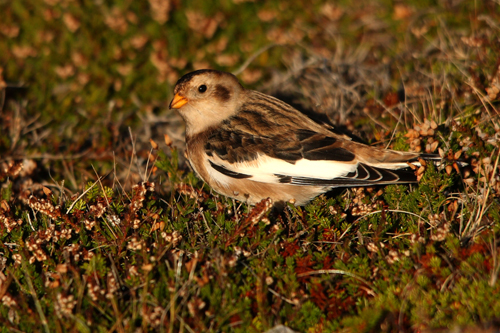 Snow Bunting in Morning Sun
Sunny and Very Windy Morning on Malin Head
With a day off work it was an early morning blast to Malin Head, Co Donegal. I had already planned to go there this week but the news of 62 Lapland Buntings on Monday and good forecast sealed the deal.

As left my house in Ballycastle I was already concerned by the strength of the wind but when I next stopped an hour and half later on the top Malin and stepped out of the car I was literally almost blown away - photography wasn't going to be easy.

On with all the gear and within minutes I was tramping across the headland towards Banba's Crown - Ireland most northerly point. Within a few minutes I had flushed a couple of Lapland Bunting which took off and with a tail wind promptly disappeared over the next hill. This was repeated a couple of times with different birds (at least six) it was difficult to pick them up in the heather in strong wind before they saw me.

On top of Tower Hill I spotted my first Snow Buntings - four of them a couple of shots and onwards. A small flock of Bunting type birds flew into a nearby reedbed but despite walking around it a decent view couldn't be had. However I did flush one each of Common and Jack Snipe.

Back towards Tower Hill a wader flew low past me letting out the distinctive trilling call of a Pectoral Sandpiper. Having check some of the nearby small pools for sandpiper without success I relocated the Snow Buntings and managed to approach reasonably close. To get any sort of photograph though I had to lie flat on the ground to minimise the impacts of the wind. Whilst photographing this small flock they were joined by another six birds before all taking off and flying northwest.

Another Snow Bunting was found metres from my car, whilst small groups of Golden Plover flew over head.

I grabbed my scope and walked to east end of the headland to get a better view of a small flock of Eider sitting offshore. Amongst them I made out a drake of the borealis race, one of two present in recent days. This bird differs from local Eider by the presence of 'sails' on its back and a more orangey bill.

From near it was back to car to explore more of the area. Part 2 to follow