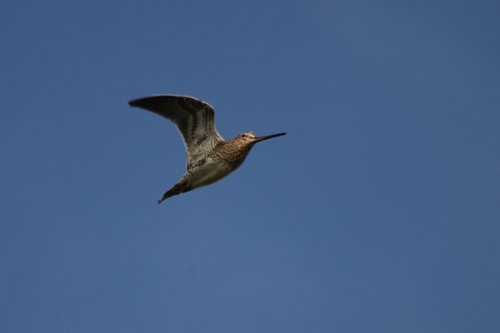 Snipe, Inch, Donegal
Malin Head - the Afternoon
After the hike around Malin Head in the morning it was time to come a little way inland and find a little shelter. A walk around the gardens and lanes produced my first Redwings of the year. Small passerines were sheltering out of view if they were still about.

It was then down to the storm beach behind Malin Head village to look for the waders, in the hope that the Pectoral Sandpiper seen earlier had settled there. No such luck though a Curlew Sandpiper was nice sighting and probably a scarce record for this area. I did however have the pleasure of meeting Ronan McLaughlin a fellow wildlife photographer from Malin Head, though now based in Cork.

From here I went to the sand dunes at Lagg to try and photogrpah the large Chough flock I had seen earlier in the morning. Tramping form the high dunes got me reasonably close to the birds though getting the light in the right direction without disturbing the birds was difficult.

It was now mid afternoon and with the wind easing only a little I decided to travel south to Inch Lake where I was rewarded with excellent views of Long tailed Tits and two Snipe in flight. Normally Snipe is a bird seen as it flies away when disturbed but these birds flew right over my head so I got a rare chance to photograph them as the sped over.