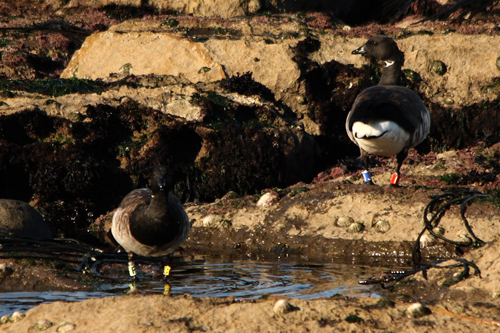 Colour ringed Brent, Ballycastle
Interesting Observations Around Home
After recent travels I decided to stay closer to home this weekend. The light was good but the winds were strong from the east.

Saturday morning produced an exhausted Buzzard flying in off the sea before landing on a fence post on Ballycastle beach. From here it flew onto nearby scaffolding placed at the front of one of the seaside cottages. It then moved across the road landing on a television aerial - all very strange behaviour.

Further around the Ballycastle Coalfields were party of 12 Brent Geese, in an area I usually see some at this time of year at migrate south. The birds were in shadow so I decided to return in the afternoon to try and get a few shots. By then there were 27 birds two of which had colour rings. I got a few record shots of the birds to pass on the Irish Brent Goose Research Group.

Meanwhile more Brent passed offshore as they made their way to Strangford Lough. Several flocks of Whooper Swan and Mallard were also observed flying south.

I decided to do the same walk on Sunday morning. This time I was greeted by two Snow Buntings and a single Lapland Bunting near the beach. A knot had joined the Turnstone, all evidence of migration. By the time I got to the Brent I could see the numbers had increased to 36. Assuming the birds had simply been joined a few compatriots I went for closer look. The two ringed birds had left to be replaced by one new bird with colour rings. Further inspection should many more young birds in this flock. Most if not all the birds from Saturday had left and been replaced by new birds.