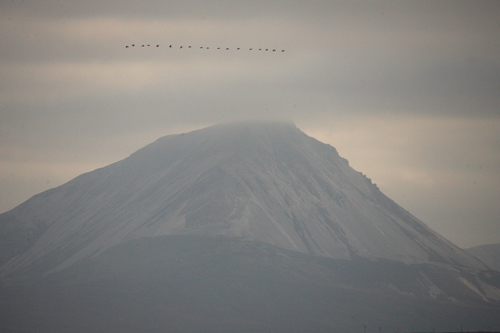 Barnacle Geese over Errigle, Donegal
Busy birding week - Part 1
This week I managed to get a bit birding done - not much photography though. On Monday I was working around the shores of Lough Neagh and a fortunate meeting with a colleague who was carrying out a WEBs (waterbirds) count of the area put me onto my first good bird of the week. Only 300 metres away was a rare Glossy Ibis. I only seen my first one in Ireland a few months ago in Wexford - this was now my third!

On Wednesday I had arranged a day of for a trip to Tory Island off north-west Donegal. An early start was well rewarded. Reaching the north-west corner of Ireland at 9am I went to Bloody Foreland for some birding before catching the Tory ferry. The gardens were quiet though there were good numbers of Meadow Pipit and Robins. On the headland I found a few Snow Bunting and Lapland Bunting - an excellent year for both.

As I made my way back to the car along the cliff top I noticed a powerful looking raptor fly across the bay, falcon shaped but more bulky and very powerful in flight. It raised a flock of Herring Gulls and a Curlew from the shore and islands which gave me an excellent sense of scale. There only one thing this could be a dark Gyr Falcon! - a rare visitor from the north. The bird continued around the headland before I had even thought of getting my camera from my ruck sack, before flying out towards Tory Island.

On the ferry to Tory things were quite quiet with the best birds being five Puffins with the bright bills fading. Time was very limited on the island so it was quick check of the best birding area the lake at the west end and surrounding fields. These fields were alive with hundreds of Meadow Pipit and a few Lapland Buntings were heard in flight.

In West Town there was a funeral and a lot of people around so I did my best to be sensitive whilst checking the "gardens" and bushes. Two Chiff Chaffs including one very greyish and pale looking bird were found. Then a smaller bird popped up on a dying nettle plant - a stunning Firecrest. Just as quickly it disappeared into a bush. I only got fleeting views as it stayed in the middle of the thick cover.

The walk to East Town produced another Chiff Chaff and the briefest of glimpses of another warbler which looked large and brown and was probably a Reed Warbler but due to time I will never know. The area around East Town was alive with more pipits and a fall of Redwing. At least 6 Robin were also seen.

Throughout the day skeins of Barnacle Geese noisely flew high southward towards the mainland.