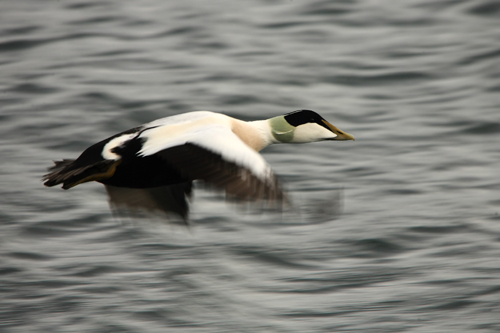 Drake Eider, Rathlin Island
Busy Birding Week - Part 2
After the excitement of Wednesday it was Sunday before I got out again. This time I thought I would try Rathlin Island for migrants.

Having got on the ferry I looked back towards the harbour to see a flock of birds feeding on the vegetation growing out of the cracks in the stonewall. Twite - at least 40 of them including on partial leucistic bird - too late I was on the ferry!

All I could hope was that there was something better on the island. Due to time constraints I decided that the area around the town and out towards the East Lighthouse would be worth a look.

Unfortunately things were very quiet compared to a few days earlier on Tory. A Chiff Chaff, a few Goldcrest and lots of Coal Tits was the best I could muster from the gardens and patches of scrub.

There were a few Snow Bunting towards the East Lighthouse. Back at the harbour there plenty of Eider including one bird which flew right past me in the gathering gloom. By the time I was getting the return ferry the rain had started making it a less pleasant journey.

Back on the mainland a check of the river produced an eclispse male Goosander, but photographs were poor in the low light and heavy rain. Hopefully it remains until I can get a few images as the birds present here previously in recent years have been adults.

They can't all be memorable days!

For all you moth lovers I have put a few images of an Angles Shade which I found on my front door on Friday in the latest images gallery.