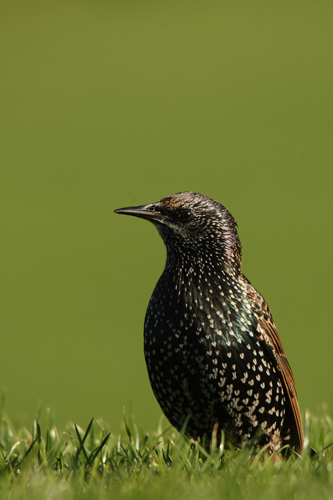 Starling, Portrush
Back to My Local Wildlife
After the recent racing around looking for rare birds, last week was much more sedate. Work and few family commitments reduced the time out with the camera (and updating this site!).

The eclipse male Goosander stayed on the river in Ballycastle for a few days before disappearing. A confiding juvenile Grey Heron was present there on Wednesday.

A few hours at Portrush on a very sunny Sunday afternoon was my next photographic trip out. The returning Ring billed Gull posed for a few images and a second winter Mediterranean Gull added interest. However the birds I enjoyed photographing most was a small party of Starlings.

Starlings are a relatively common breeding bird in Northern Ireland, with number swelling in winter. Numbers declined across Northern Europe with changes in agriculture since the 1960’s though they seem to have stabilised somewhat. In winter the breeding population is joined by birds form northern and east Europe and form mass flocks of thousands, especially where they roost. I hope to visit a few roost sites this winter to photograph them, including one which has contained approximately 500,000 birds in recent years! Even this pales into near insignificance compared to the 10 million which roost each winter in Rome!

From a distance they appear as uninteresting dark birds, but up close in sunlight they take on a whole new appearance, with glossy purple and green sheens.

Starlings can be excellent mimics, learning the all of other birds and in captivity even speech.