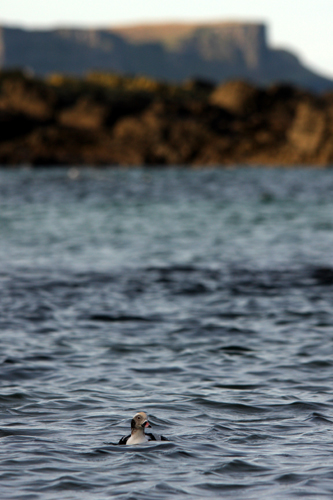 Long-tailed Duck, Ballintoy
Scarce Visitor Stays at Least One More Day
The Long tailed Duck first seen last Saturday close to Ballintoy Harbour stayed at least until Sunday morning. This allowed me to get some nice images of the bird.

I must have looked a sight on Sunday morning dressed in waders and a waterproof jacket wading into a very cold North Atlantic - but it was worth it. Initially the bird was a little wary, but I stayed in the water and slowly it became more used to my presence. It gradually got closer and closer feeding at times only 6 or 7 metres away. In the end the duck appeared to be using my presence for protection when a Grey Seal started to show an interest in it!

Unfortunately a combination of the nearby cliffs, cloud and low sun angle meant the light was never great, but it was a pleasure to be so close to a bird which is a scarce visitor to North Antrim. These small sea ducks must be the most attractive of our duck species, in particular the male has a tail feathers of between 10 and 15cm long. They feed by diving for molluscs, crustaceans and some small fish and are capable of diving to some 60m, though this was not necessary in Ballintoy, where the water was up my waist where it was feeding.

This species breeds by moorland pools, marshes and lakes and in coastal areas of northern Canada, Iceland, Scandinavia and Arctic Russia. The birds move south in the winter with regular wintering birds to found at Fanad Head, Co Donegal and smaller numbers in Belfast Lough especially off Carrickfergus.

More images are available in latest images gallery for a while.