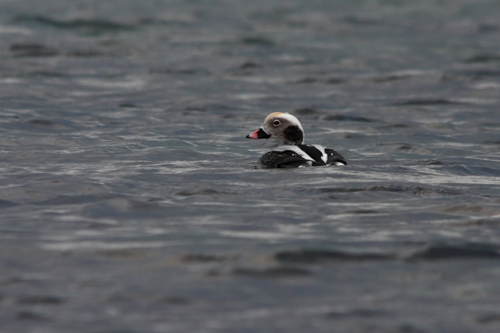 Drake Long-tailed Duck, Ballintoy
Unusual Finds
A few interesting sightings on the North Antrim Coast today. My first stop was Ballintoy harbour where the Twite flock has risen to over 40 birds. On the shore Purple Sandpipers and Sanderling were feeding amongst the Oystercatcher, Redshank and Turnstone. A great Northern Diver was feeding briefly just offshore before moving further offshore.

Back into Ballycastle mid-morning there was no sign of the Goosander which seems to be spending more time up stream this year. As returned home I was amazed to see one and then a second Swallow feeding over the Marine Hotel along the seafront. These birds should be well on their way to southern Africa, instead of being in North Antrim.

A return trip to Ballintoy with my son in the afternoon produced a fine drake Long tailed Duck just offshore. I hope this beautiful bird which is quite a local winter rarity remains in the area until I can get some nice shots in better light.

Finally on returning home nine Waxwings flew over my house.