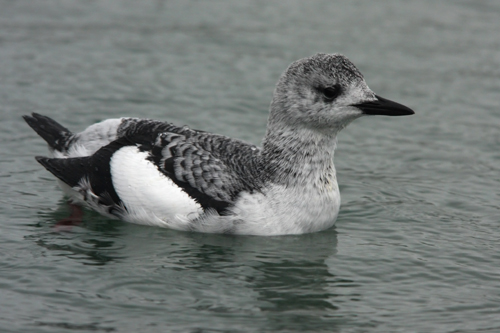 Black Guillemot, Glenarm
Any Port In A Storm
South easterly gales and torrential rain has hit the North East coast of County Antrim for the past few days. Perhaps surprisingly it was too near I made my way on Wednesday to experience winds and large crashing waves.

Well more accurately I made my way to some of the harbours along the east Antrim coast to look for birds which may be sheltering out of the storms. Glenarm Harbour for example had more than twenty Cormorants and 6 Black Guillemot, the latter now in winter plumage. Despite the conditions and very poor light I managed to get few reasonable images.

Also at the harbour was a flock of eight Twite feeding and rough grassy areas.

A short seawatch at Garron Point produced two Gannets, 5 Common Scoter and range of gull species, including one Great Black backed Gull predating a dead Guillemot floating on the sea of crashing waves. One bird which didn't make to cover in time.