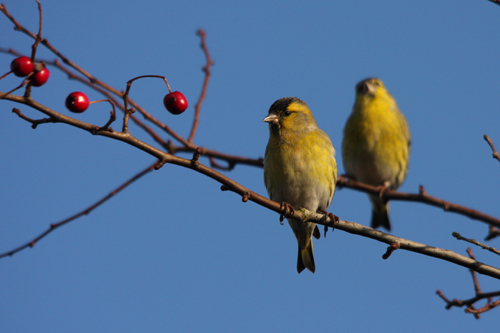 Siskens, Donegal
Fabulous Finches
Today I went across to County Donegal in search of the Otters I was watching and photographing last winter. Unfortunately there was no sign of them despite a lot of searching, though a few locals I met had said that there were still some around this year, though less obvious.

As the sun broke through the early cloud I was greeted to a tame flock of finches feeding in the alder trees close the lake. The flock was mainly made up of Siskens with smaller numbers of Goldfinch and Redpolls. The looked glorious against the blue sky as the flitted amongst the bushes.

An impressive count of over 15 Bullfinch were noted nearby with commoner species including Chaffinch, Blue Tit and Great Tit seen. In the neighbouring fields Skylarks and a few Tree Sparrow were recorded.

Out on the lough, which was much larger than usual due to flooding, there were quite a few Whooper Swans which seemed in no rush to go out the fields to feed. Several skeins of Greylag Geese and Canada flew over the area. Duck numbers, however were relatively low for the time of year.

Kingfisher and Sparrowhawk were the final highlights of the visit.

A brief stop at Portrush on the way home produced the usual suspects, with the Ring billed and Med Gulls still present.

Finally a quick check around Ballycastle failed to produce the Waxwings seen early in the week.