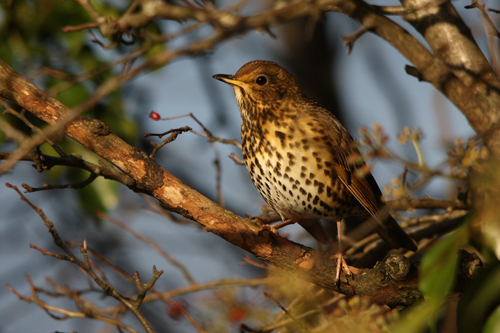 Song Thrush, North Antrim
A second hard winter hits local wildlife
Well winter is certainly back with a vengeance. It seems like no time since last winter’s ice and snow causing disruption to both humans and wildlife.

Again this week much of the north Coast was shrouded in a white blanket of snow. This of course limited my photographic activities (as did a continuing ankle ligament problem). When I got a chance to get out on Sunday morning I decided to try something different – a new feeding station on a woodland edge in north Antrim.

First though I thought I would do a quick visit to a few other locations. On my way to Portrush I was surprised to see a male Hen Harrier fly across the road in front of me just to the east of Bushmills. Unfortunately by the time I stopped on icy roads it was out of range for a photograph. On the edge of Portrush three Sparrowhawks put an aerial display over the cliff top. In the harbour a Great Northern Diver stayed just out of range of my lens for a decent shot.

It was time to try the new feeding station. Almost as soon as I put out the feeders Blue and Great Tits were checking them out. Next came a Dunnock and Robin, followed by Chaffinch, Goldfinch, Blackbird, Song Thrush and House Sparrow. To my surprise a Tree Sparrow put in a brief appearance. All this in the first couple of hours, so hopefully this site will pay dividends over the next few months (as long as I can get to it given the weather!).

Elsewhere in North Antrim there seems to have been an influx of Song Thrush and Blackbird in the past week, whilst a Little Grebe put in an appearance on the River Margy in Ballycastle on Friday lunchtime. A small Linnet and Twite flock can often be seen near Ramore Head in Portrush and small numbers of Whooper Swans are still passing over occasionally. In the woodlands Woodcock numbers have increased with more birds migrating to avoid the northern European winter.