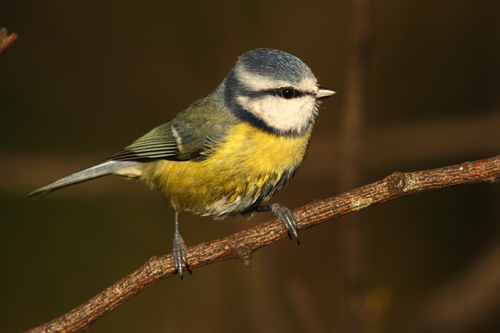 Blue Tit, North Antrim
The Beauty of Common Birds
Too often I am guilty of missing the beauty in the nature under my own nose in search of something rare or unusual. Rather than travel across the country with the promise of some decent light I again stayed closer to home in search of some the more common, but no less interesting wildlife.

The Blue Tit, if it were a major rarity would have twitchers travel from all over to marvel at the colours. The mix of blues, green and yellows with the facial pattern are enough match many more exotic species. Almost every garden with a peanut feeder must have them - but when was the last time you really looked at one with the sun on it?

Couple these looks with the agility to perform many acrobatic performances in search of food must make it a star in any garden.

Some Blue Tit Facts:-
They are one of our smaller birds being only 12cm long and weigh on average 11g

Blue Tits live on average for only three years, though they can live up to 9 years. They are susceptible to cold, wet winter.

The front of their head glows brightly under UV light, which may be how females choose males. Males are normally brighter coloured than females
They feed on small insects, spiders, fruits, seeds and nectar.

Nesting Blue Tits have large clutches with up to 16 eggs being laid in April/May to coincide with hatching of caterpillars. Eggs are incubated for 13-15 days.

Their range is from Western Europe as far east as Iran and south to Northern Western Africa.

An interesting example of culturally transmitted learning when in the 1960s of Blue Tits taught one another how to open milk bottles with foil tops, to get at the cream underneath. The move to semi skimmed and supermarket bought milk has seen this behaviour largely disappear.